Darzi and the abuse of power 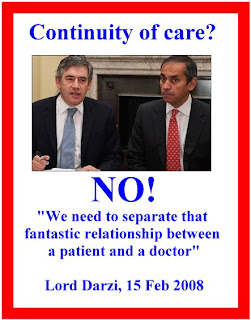 This government just seems to go from one scandal caused by rank incompetence to the next. The reasons for 'renegotiating' the GP contract are being hidden by the Department of Health, as a reply to a Freedom of Information request neatly demonstrates:

"Thank you for your email of 2 February requesting, under the Freedom of Information Act, documents detailing discussions between Ministers and officials regarding the proposed changes to the GMS (GP) contract in 2007/08. Your email has been passed to me for reply.

I am afraid that the information you have requested is exempt under section 35 of the FOI Act, as it concerns the formulation of Government policy."

Why is it acceptable for the government to keep such important information secret when they are repeatedly found to be making decisions against the public interest in an underhand and corrupt manner?

Computer Weekly has done some sterling work in forcing out evidence that shows how the democratic process is cynically manipulated by those in power for short termist political gains, rather than being used as it should in the public interest.

Anyone keeping an eye on the news should be able to start putting this jigsaw together. Standards of care are dumbed down, more and more under trained staff are empowered to meet meaningless targets, targets are spun and care suffers as a direct result. More and more work is shipped put the private sector with win-win contracts, as primary care is privatised and depersonalised via the unconsulted Darzi polyclinic agenda. Are the real reasons for this antidemocratic privatisation too disgraceful for them to be revealed? There is only one way to find out.
Posted by Garth Marenghi at 2/18/2008 08:34:00 pm