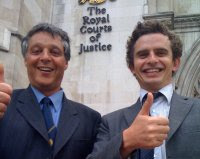 RemedyUK has won the first stage of its legal challenge against the GMC’s refusal to investigate the managerial deficiencies leading to the MTAS recruitment fiasco. Mr Justice Hickinbottom found in favour of Remedy in their Permission hearing.

The case can now go on to a substantive hearing which is likely to take place before the end of the year. The case concerns the jurisdiction of the GMC over complaints against senior doctors who were responsible for MTAS.
MTAS was the new process for the selection and recruitment of junior doctors and was an integral part of the "Modernising Medical Careers" initiative. It proved to be a disaster. Remedy argued that the doctors responsible should be referred to the Fitness to Practice committee of the GMC for deficient professional performance and/or serious professional misconduct, and over 1600 supporters joined them in this. The GMC declined to hold an enquiry.
"We’re heading into the biggest public health crisis in recent memory and it’s particularly important that the conduct of doctors in senior managerial positions is not impervious to scrutiny" said Matt Jameson Evans, Chair of RemedyUK. "Accountability lies at the heart of modern professional medical practice, and there should be no double standards for those sitting at senior levels."
The judge acknowledged that MTAS has been a disaster which had brought the profession into disrepute. He recognised the precedent of the case of Roylance, which established the jurisdiction of the GMC over doctors in management, and he recognised that there was a link with the present case. He therefore granted permission for the substantive hearing, on two grounds, and he also awarded a Protective Costs Order in Remedy's favour. He declined the GMCs request for a reciprocal cost-capping.
"This isn’t solely about the events of 2007" said Richard Marks, Head of Policy "but it is also about the jurisdiction of the GMC over doctors in management roles." This is a great day for Remedy. We survive only on our paid supporters - if you value what we do then please join us today.
ps Remedy Uk and others have also had some rather sensible things to say on the topic of the European Working Time Directive reducing junior doctor hours to 48 per week this August at the very same time that the country may be in the midst of a flu pandemic, great work as always from the government and Department of Health, maybe it's time for another deckchair rearrangement Mr Burnham?
Posted by Garth Marenghi at 7/27/2009 09:02:00 pm 2 comments: