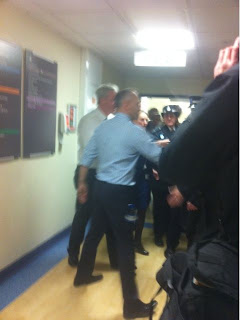 So the antidemocratic farce that is Andrew Lansley's 'Health Bill' has not yet been scrapped.  Today the deeply unpopular and arrogant health minister needed a police escort to visit an NHS hospital.  This really should tell the government and Lansley himself that things have gone far enough, if these cretins cared one iota for democracy they would have chucked Lansley's  deranged manifesto of privatisation firmly in their privatised dustbin.

If the NHS Bill does end up going through it will only prove just what a complete lack of democracy we now have in this country.  The wealthy people in power can push through terrible legislation that shafts the average man on the street but furthers their own selfish interests, it is such a sad indictment of the state in which we live.  Lansley need a police escort and a media blackout, yet even with this his every move is still a PR disaster, such is the idiocy of his Bill.

I hold out a lot of hope that Lansley's toilet roll will be flushed down the bog where it belongs.  The momentum appears to continue to gather, the Royal Colleges look close to full blown opposition, the public are getting angrier and some of the media are taking more notice.  It is just a great shame that so much of the mainstream media is so unable to call a spade a spade, there is too much corrupt conflict of interest around for the truth to be broadcast far and wide as it should be, even so lying Lansley has been found out, we all know that his bill is a dishonest piece of privatising filth designed for one thing, making the rich richer and the poor less healthy in the process.
Posted by Garth Marenghi at 3/05/2012 09:44:00 pm 4 comments: