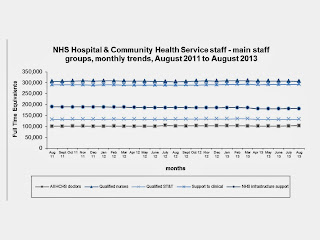 The NHS is in crisis because the current government have wasted billions in yet more corrupt market based reforms which will enrich private firms at the expense of the tax payer.  Sadly those in control, Jeremy and the Department of Health, don't want the truth to be revealed and are frantically trying to spin reality in their favour.  For example yesterday Hunt said on Twitter:

NHS spending is barely increasing and it is going up at a rate well below normal inflation, therefore in the real world NHS funding is being cut, year on year, and this is having the inevitable knock on effects on services, local providers are cutting services left, right and centre as a result.

The talk of 'increasing staffing levels' was echoed by another from the DH propaganda ministry, Tim Jones, the head of news at the DH:

Hunt, Jones and DH are engaged in a disingenuous game of tricking the public and misrepresenting the reality of what is going on in the NHS on the front line.  It is easy to cherry pick time points to pretend staffing is increasing as Hunt and Jones did yesterday, but the above graph shows that this is extremely misleading.  Staffing levels have been static in recent years, as evidence above and trying to pretend anything else is simply shameless political spin.  Here is a graph of the net change in staffing levels, showing that claims of a recent increase are highly disingenuous: 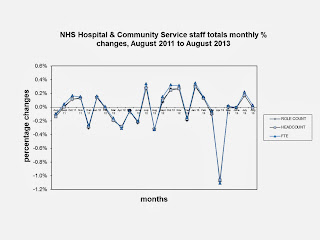 So here we have a situation whereby those in control are proving they cannot be trusted.  The reality on the ground shows crisis in emergency departments, staffing shortages and numerous service cuts.  Hunt and the DH cannot be trusted on the NHS, proving this government are on their last legs.