MAST cosying up with the chiroquacktic community 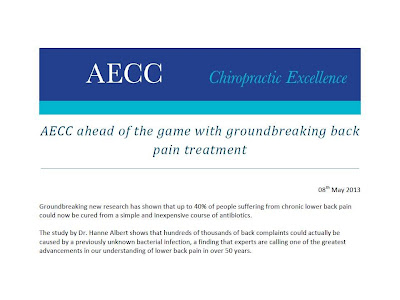 It is interesting that MAST Medical are making such efforts to spread the results of their research within the chiropractic community.  The AECC (Anglo-European College of Chiropractic) strangely posted the above page commenting on MAST treatment and suddenly removed it from their website, without explanation.   The full page can be accessed here.  Amongst the interesting quotes are the following:


"Groundbreaking new research has shown that up to 40% of people suffering from chronic lower back pain could now be cured from a simple and inexpensive course of antibiotics........Neil Osborne, Director of Clinic at the College is one of the first practitioners in the UK to undergo a Modic antibiotic spine therapy (MAST) course which puts him at the forefront of this new procedure......The new treatment could save the UK economy billions of pounds"
It reads like an uncritical press release for MAST.  The 40% figure is a massive over-exaggeration of reality and the 'billions' saved is also pie in the sky stuff.  Neil Osborne is now at the 'forefront' of this new 'procedure' apparently, or rather he has parted with some cash to be told about the a trial by the very researchers who carried out the trial!  The British Association of Spinal Surgeons have released some far more sensible information on this antibiotics for back pain story:
"BASS considers this to be a well conducted trial which provides evidence that a small number of patients could gain some moderate improvement in their condition with a course of antibiotics."
This is a far more honest and representative opinion of the research of Albert et al.  It is also rather fascinating that Hanne Albert, the lead author who thinks that a conflict of interest is not a conflict of interest, is speaking at the McTimoney chiropractic conference this November.  One must remember the track record of the chiropractic profession in plugging unproven and sometimes dangerous treatments, ignoring scientific evidence, suing their critics, exploiting patients with misinformation and indulging in general quackery.  Have a quick peek at these articles on McTimoney too.
The fact that MAST are cosying up to the chiropractic profession says a lot.  It seems MAST and the chiropractic profession have rather a lot in common.  It is deeply inappropriate and unethical that MAST are plugging antibiotic treatment for back pain in such a manner.  Firstly practice should not change on the basis of one trial that has not been replicated independently, especially when two of the authors failed to declare their significant conflicting business interests to the publishing Journal.  Secondly the way in which MAST Medical are effectively advertising their services and seemingly exaggerating the potential gains of treatment appears rather cynical to me.  I would not touch MAST Medical with a bargepole until their research has been independently replicated by a trustworthy research group.