David Cameron's 7 day services 'on the cheap' will cost lives 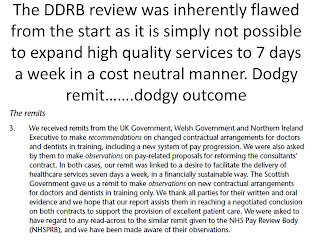 The government are on the run, the NHS is struggling and they are being exposed as dishonest and incompetent on multiple fronts. The government recently breached the 18 week target for the first time ever and NHS satisfaction ratings are dropping rather rapidly.
A great example of their overt incompetence and dishonesty is the fact that contract reform is 7 day expansion of services on the cheap. It is a scam. DDRB remit set by government made it clear that we are going to be doing more for no extra reward, essentially Cameron's vacuous 7 day plans are being funded by cuts imposed and bullied upon staff.
No matter how you dress this up, this is a scam, amidst widespread recruitment and retention crises, with the consequent dangerous rota gaps increasing, the ONLY safe way to expand services is WITH increased funding.


The NHS' funding is also dangerously low, the 22 billion of 'efficiency savings' are cloud cuckoo - we cannot fund what we have already without huge deficits across the board.
Cameron and Hunt are dishonest, incompetent and dangerous. There is decent evidence that inadequate funding costs lives, in this context the drive for 7 day services on the cheap is not only stupid, it is also overtly unsafe. This is the reality of  #daves7dayscam
Posted by ben at 2/14/2016 09:12:00 am No comments: