This is the full response I have received from the DH:

Thank you for your recent correspondence to the Department of Health about the image used in a tweet posted on 17 July.  I have been asked to reply.

The Department has looked carefully at this matter and what took place was an entirely unintentional mistake.  The Secretary of State for Health’s sole intention was to celebrate some excellent clinical work he was grateful to have been able to see first-hand at University College London Hospital.

As soon as the Department was alerted to the mistake, the image was removed and replaced.

I hope this reply is helpful.

Paul Larkin
Ministerial Correspondence and Public Enquiries
Department of Health"
The DH totally fail to see the point of the complaint.  It is utterly irrelevant that the clear error was 'unintentional'.  Jeremy Hunt clearly breached patient confidentiality with his tweet and there has been zero consequence to this action.  We have not even seen the whiff of an apology.  Given Hunt's talk of candour and the way in which frontline staff are regularly punished for such clear breaches, it is utterly limp of the DH to write off such a breach in this manner.  It really says a lot about their incompetence and their failure to live by the rules which they are happy to destroy others with.
Posted by ben at 7/24/2015 06:36:00 pm 1 comment: 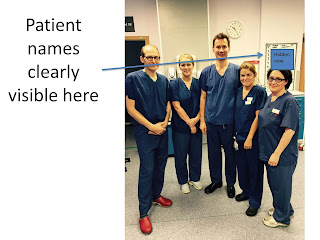 http://www.info.doh.gov.uk/contactus.nsf/memo?openform
"Dear DH
I would like to make a formal complaint about Jeremy Hunt's tweet on the 17/07/2015 (see attached screen grab).
The photo shows patient identifiable information clearly on a board in the top left of the photo.
This tweet constitutes a clear breach of the Data Protection Act.
I expect this matter to be thoroughly investigated and at an absolute minimum Jeremy Hunt should issue a full and frank apology to the patients whose confidentiality he has clearly breached,
regards"
Posted by ben at 7/18/2015 03:07:00 pm 3 comments:

Here is my response to the GMC consultations on 'credentialing' and 'generic professional capabilites':
"Dear GMC

As regards the two consultations:

Secondly as regards the 'generic professional capabilities', the whole premise behind this plan is deeply flawed.  Doctors in training are already overwhelmed by a burdensome bureaucratic system that consists of largely unreliable and poorly validated assessments.  The harm done by such a flawed competency based framework are clear and well documented in the medical literature.  While the framework domains adds nothing to what is assessed by the extensive array of assessments that doctors in training are already subjected to today.  The GMC has simply not provided a clear rationale as to why such a framework is necessary.  Without a proven need the framework promises to introduce yet more burdensome bureaucracy on doctors in training at a time when service pressures are becoming increasingly unsustainable.  While the talk of assessments will simply lead to more box ticking of more poorly validated assessments which will do nothing to help standards or patients, rather the opposite.

I would therefore like to register my general lack of faith in both these consultations as the need for these proposals has not been adequately demonstrated,

First the GMC should do no harm,

regards"
I would urge all doctors to email your thoughts to educationconsultation@gmc-uk.org - do not feel obliged to use the GMC's highly constrained white space forms, simply express your opinion to them without being pidgeon holed.
Posted by ben at 7/06/2015 07:52:00 pm No comments: