Ambling into the abyss 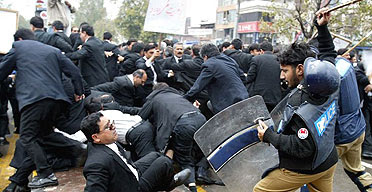 Apologies for my recent lack of blogging, have had my finger in many a pie recently, shame not many have been particularly fragrant, that's the NHS I guess. Quite a lot has been going on as regards the infamous Dr Scott, he's now back at work but at what cost, only time will tell I feel. I certainly feel that the abuse of power that appears to have gone on in this case is merely the top of the iceberg on this intimidatory front.

The medical hierarchy seems rotten to the core. Many a doctor has been subjected to this kind of disproportionate venom in recent years, frequently the suppliers of the venom are remarkably powerful people bullying people with much less power, and those with the power do not seem to be particularly accountable for their actions.

A recurring theme throughout the failed reforms of MMC and MTAS has been just how unaccountable those in positions of power have been, no one will take responsibility and no one takes the blame when things go tits up. Hence the same people remain in their ivory towers running the dismal show. Darzi's review is simply a game of rearranging the deckchairs, it's not the formation that matters, it's the fact that our deckchairs are bloody useless.

There is a hell of a lot more to this Dr Scott story than one might imagine, I will leave the rest to your imaginations. There's a nice summary of events here, it doesn't fill one with much hope for the future. This is bigger than the odd individual for me, this is about a system that does not work, a few institutions have become far too powerful over time and they react to criticism in the only way they know how, with the iron fist. The problem stems from Whitehall and the tentacles extend locally to the Deaneries and centrally to the GMC.

The worst thing is that the behaviour of those in power goes against everything that we are taught to do as good doctors and it stifles progress so absolutely. Those who dictate the 'duties of a doctor' seem to think that they themselves are exempt from the same rules because they wrote them, they are hypocrites on high.

The clinician on the front line is so very accountable for his or her actions, as well as being an easy target should they fail to comply with the centrally enforced directives pushed onto them by small minded managers. Meanwhile the medico politicos and the managers are completely unaccountable for their own errors, this is no healthy state of affairs. However it does explain why those in power are so keen to crush dissent with so little regard for the law, they are desperate to keep hold of their positions of power, and they can see that if they are exposed for what they really are, then their time will most certainly be up. They are most definitely afraid and that is our best weapon.
Posted by Garth Marenghi at 9/22/2008 05:11:00 pm