"The independent Shape of Training review was established by the four governments of the UK and was supported by a number of organisations including Health Education England, The Medical Schools Council, NHS Education Scotland and The Academy of Medical Royal Colleges.
It was the GMC’s role as the secretariat to arrange meetings with a whole range of organisations to enable them to discuss the proposals. However, it is ridiculous to suggest that there were any so called ‘secret meetings’ held with politicians or anyone else. Of course there were routine meetings to help Professor Greenaway gather views from those with an interest in this area. There was also a public consultation, discussions and country-wide events throughout the process and the details are available for all to see on the Shape of Training review website.
As is perfectly normal the only notes taken were by GMC staff, the purpose of which was to support our secretariat role and as an aide-memoire for the sole use of Professor Greenaway who led the review. It is standard practice for these types of notes not to have been publicly available.
There are differing views among stakeholders as to what changes are required but there is a consensus that more needs to be done to meet the changing needs of patients and to provide high quality care in the future.
The review has made recommendations that could require changes to postgraduate training and everyone accepts that more work needs to be done to understand the benefits and impact of this. However, any proposal for change will involve seeking the views of doctors in training, those who train doctors, and those who fund education, training, and the health services across the UK."
I have reproduced Niall Dickson's response above, just in case it is retracted.  I have to say I found it rather revealing for several reasons.
Firstly Niall Dickson claims it is 'ridiculous' to claim there were any secret meetings, however there is no justification to support this statement.  The meetings which were called 'secret' took place behind closed doors, were not formally minuted, were not referenced in the review's paper trail and were not reflected in the review's evidence section.  To anyone outside the review, the meetings can accurately described as 'secret' in my opinion.
Niall Dickson is also rather economical with the story on the GMC's use of the meeting notes as the GRC judgement made clear.    The talk of 'consensus' is ironic given that the key review recommendation to shorten consultant training went against the majority of the consultation respondents' opinion.
Finally the response from Niall Dickson totally ignores the four questions posed to the GMC about various issues that were unearthed and supported by various pieces of evidence, I wonder why Niall? 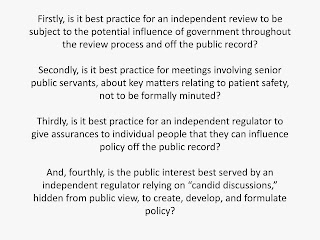