The MMC wolf needs to be stripped naked 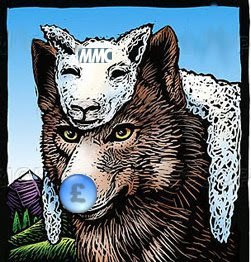 This is quoted from the shadow health secretary Andrew Lansley MP from last week's debate:

"The principle of modernising medical careers is accepted and we also accept many of the principles in the documents of 2002 and 2004 that led to it. We should not rely on doctors in training for service delivery and training must be limited in time. It cannot be open-ended. As Sir Liam Donaldson said in his report about the “lost tribe” of senior houses officers, we cannot have junior doctors who drift from one SHO job to another for years without ever making progress in specialist training.

Let us remember that one of the principles of MMC was that it was intended to be flexible and widen career choice. Where did that one go in the translation of principles into practice? The way in which MMC has been implemented is lamentable. When people look at the political gravestones of the figures in the Government, they will see carved on them, “It should have worked in principle, but it didn’t work in practice.” The Government started out with good intentions, but time and again they have failed to deliver. Here is another lamentable and shocking example of how they have failed to turn what, five years ago, was a straightforward set of principles into something that works in practice for those in the NHS today."

The seven principles underpinning MMC are:

There are some very contradictory statements and principles here. Even Andrew Lansley says 'training must be limited in time' and that ' it was intended to be flexible', surely one goes against the grain of the other? While in the seven principles of MMC there is no mention of training having to be 'limited in time' specifically, however if this is what 'structured and streamlined' is supposed to mean then surely this contradicts the 'flexible' principle?

The principles of 'trainee centred' and 'service based' also seem to be somewhat contradictory. Training and service provision are inextricably linked and it is all about getting the correct balance between the two, while ensuring that trainees are adequately supervised without wrapping them in cotton wool. Training will be damaged by focusing too much on service provision and vice versa, while the consequences of focusing solely on short term service provision will be catastrophic for the service in the long term. It is also ludicrous to claim that 'service provision' is not an integral part of training; learning when to call for help with adequate levels of supervision is a very important part of maturing as a doctor.

In fact the genuine motives behind MMC have yet to be revealed, in fact the DoH has gone remarkably quiet on this matter.

"The principle of modernising medical careers is accepted"

In this context the above statements come to mean absolutely nothing. Modernising Medical Careers is a wolf in sheep's clothing, a beast that has been dressed up in secret and released on an unsuspecting public amid a blaze of propaganda. The principles amount to nothing concrete, they are designed to be a vague politically correct smokescreen that will mask the real cynical political motives that lie beneath.

MMC is a framework designed to produce less skilled and hence cheaper doctors under the cloak of "proven competence". The government realise that the public won't be happy to be seen by less skilled doctors, hence the need for the 'cloak'. The blame when things go wrong will be conveniently placed at the door of their lovechild quango PMETB.

The Department of Health has been warned of the danger to patients posed by MMC and MTAS, a warning which they ignored like many others. Even ministers have been caught on the record stating that MMC was not hatched in secret, it is therefore strange that the DoH is with holding the motives behind MMC from the public. I argue that 'Modernising Medical Careers' has come to represent these hidden motives and however well intentioned the principles may be, in reality they mean nothing if they are being used to force through a hidden political agenda.

It is obvious that we all want better medical training so that as good a sustainable service for patients as possible can be provided for many years to come, however MMC dressed up in its sham principles will not help achieve this; it may well do the very opposite. A new approach is needed, one that consults the medical profession and its grass roots properly, and one whereby the process is conducted completely out in the open in a genuinely democratic and transparent manner.

Until then, the principles will mean nothing and must be actively opposed; as if the wolf manages to trick his way into the field full of sheep, the consequences will not be pleasant.